Cumberland Valley is Home to a Strong Military Community

Cumberland Valley has rich ties to the military community. With three military installations located within the County, this area has become a place where people can advance, reunite, retire and learn about the country’s military past and future. In 2021, Carlisle was ranked #12 in the Best Places for Retired Military to Live in the Country by Money Inc. Factors included location, quality of life, outdoor recreation and a low cost of living. 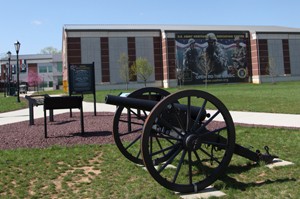 The military has played an important role in the economy of Cumberland Valley since before the Revolutionary War. The most famous of the three facilities located in or near the County is the Carlisle Barracks, which was founded as a supply post in 1757. The other two major military installations in Cumberland County are far more recent additions: Naval Support Activity Mechanicsburg was established at the beginning of World War II and DLA Distribution Susquehanna was originally built as a supply depot during World War I. Learn about these facilities below. Nestled in the beautiful Cumberland Valley, Carlisle Barracks is one of our nation’s oldest military installations. Since 1757, Carlisle Barracks has witnessed pioneering concepts in military training and education, and innovative measures to prepare for a changing world.

In the spring of 1951, the U.S. Army War College, the senior educational institution of the U.S. Army,  relocated to Carlisle Barracks. Established in 1903 and formerly located in Washington, D.C., the college had functioned as part of the General Staff during its early years. It chiefly prepared selected officers for high command. Distinguished graduates of that period included John J. Pershing (Class of 1905), Dwight D. Eisenhower (1927), and Omar N. Bradley (1934). Classes were suspended in 1940 during the preparedness mobilization for World War II, and not resumed until a decade later at Fort Leavenworth, Kansas, for the 1950-51 academic year.

At Carlisle Barracks, the Army War College grew steadily as it performed its mission of preparing officers for leadership at the highest levels. The college soon outgrew its main academic building (the current Upton Hall) and transferred to the newly constructed Root Hall in 1967. Two specialized agencies evolved into integral parts of the Army War College: the Strategic Studies Institute, first formed in 1954; and the Military History Institute, established in 1967. The Center for Strategic Leadership, a state-of-the-art war gaming complex that opened in 1994, contributed another dimension to the college and to Carlisle Barracks’ history as a distinctive U.S. Army campus.

The Carlisle Barracks also stretches out to include the nearby US Army Heritage & Education Center. This is the primary facility for US Army research and includes the indoor Soldier Experience Gallery, library and archives, changing exhibits and the outdoor mile-long Army Heritage Trail with full-scale military exhibits. By the early 1940s it was abundantly clear the Navy needed inland supply depots. With the advent of the “Five Ocean” Navy, overcrowded coastal Navy Yards and Depots were in need of relief. The Mechanicsburg area was one of five locations chosen for new Depots. Close to the Pennsylvania Turnpike and the railroad yards at Enola, the Pennsylvania farm land offered an ideal location. Naval Supply Depot, Mechanicsburg was commissioned on 1 October 1942.

Under the leadership of the current Commanding Officer, Captain James Smart, Supply Corps, USN, the NSA Mechanicsburg mission is to provide an operationally ready, secure shore infrastructure built upon a streamlined shore installation management organization committed to quality of life for our military members and civilian staffs and quality of community developed through extensive interaction and involvement with the community. DLA Distribution Susquehanna, with facilities at New Cumberland and Mechanicsburg, provides military and commercial repair parts, clothing and textiles, medical supplies and industrial and electronic components to military customers throughout the United States and the world.

The organization supports the fielding of new weapons systems for the Army through the assembly of repair parts, tools and technical manuals at the Unit Materiel Fielding Point and manages the Navy’s Publications and Forms mission. DLA Distribution Susquehanna is also one of DLA Distribution’s two sites where Unitized Rations are built, which are used in the field feeding systems for the Army and Marines.

DLA Distribution Susquehanna is also the host for the New Cumberland installation and is responsible for the day-to-day operations and maintenance of the small city within its gates. Included are a full range of quality of life services to military members, their families and civilian employees, including child care, a fitness center, golf course, bowling center, and a swimming pool.

Learn more about military’s impact in the Cumberland Valley.

In 2014, CAEDC worked with the Pennsylvania Military Community Enhancement Commission to establish the Cumberland York Area Local Defense Group (CYALDG)  to coordinate, advocate, develop and implement recommendations to enhance the military value of the installations in the area. Find more information on the CYALDG.

Key Industries
Recent News
January 12, 2023 How to Create a Business Plan from an Idea